Getting up to shoot sunrise every day. 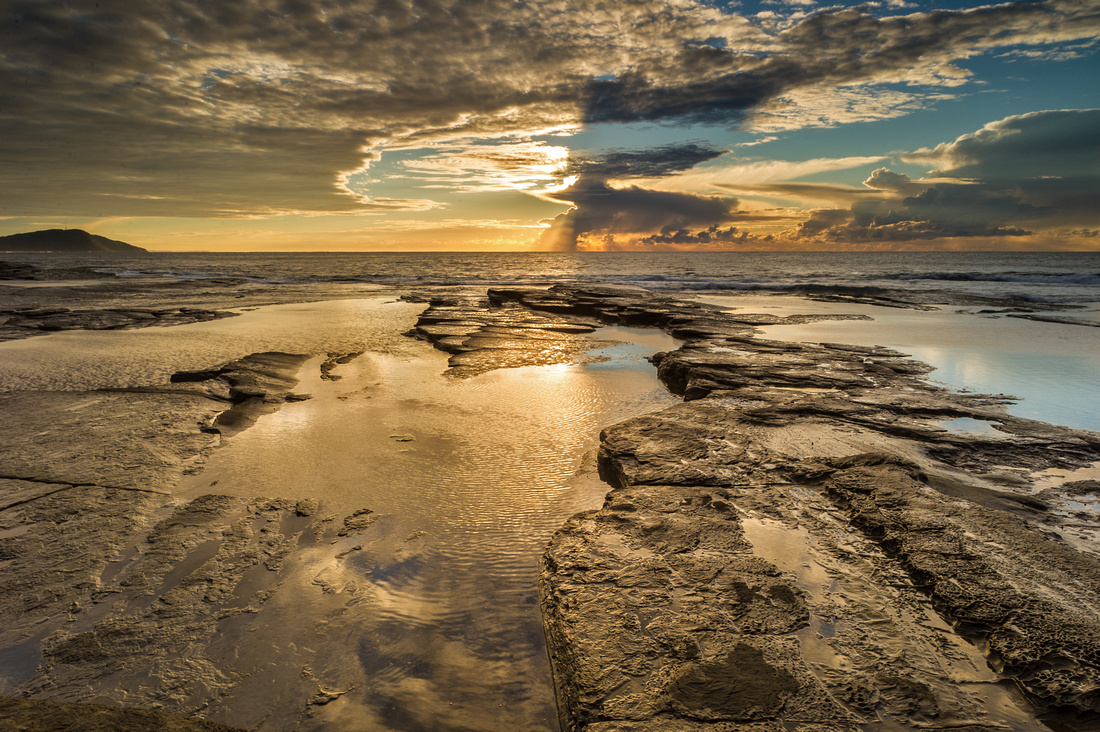 If you have had a look at the Daily Sunrise section of my website you will have noticed that I have been shooting Sunrise every day since the 6th October 2013. For over 5 Years now I have been getting up early and going to a location to shoot the start of a new day. So many people have asked over the years the same questions.

How do I manage to get up day after day so early?

Don't you get bored shooting the same thing over and over?

When do you ever get a sleep-in?

What happens when you're sick?

Have you ever seen anything strange?

Let me answer a few of these questions so I can give you an insight into the mind of a Photographer.

First of all, how do I manage to get up early every day? Easily, I love Photography and even after 5 years I still enjoy getting behind the lens. I have always been a person who can wake early to do things. In the past I would rise very early and take out my Telescope so I could observe the night sky. I worked in Sydney or Newcastle for 20 years and joined the masses as they migrated to those metropolitan centres for work. Being on a train during Sunrise was difficult to take some mornings as I wanted to watch and shoot. So when the opportunity presented itself in 2013 to quit the rat race and start my own business I jumped at the chance. Now I get up at the same times but I get to do something fun and interesting instead.

Don't you get bored shooting the same thing over and over? No. It’s not really the same thing over and over. Yes its sunrise but every sunrise is different. It can be a bit of a challenge when we have stretches of "no cloud" sunrises but on the whole each day is different. I also shoot at various beach and waterfront locations on the Central Coast. While I am familiar with the usual spots each locations has there are always spots that I haven’t reached or explored properly. Plus the beaches can vary from week to week and month to month. At the time of writing this Macmasters Beach is almost completely inundated with sand, most rocks and the pool are covered. A similar change has been seen at Killcare and Umina. These changes also make for interesting photography as they show the changes that occur in nature.

When do you sleep in? Never. Not exactly true, I have had a couple of days where my alarm, internal body clock or external alarm hasn't gone off. On those days I shoot the sunset. Also my Photography business has me working late some nights and it can be hard and dangerous to get up to shoot the next morning. My list of locations for Sunset is limited due to the orientation of the setting Sun. There are as you can see gaps in my shoot dates and they directly relate to the next question I get asked.

What happens when you're sick? In most cases I get up and shoot anyway. I have done so with Colds, Flu, Bronchitis, a broken coccyx, broken foot, back pain and headache. Occasionally the symptoms get too severe and I find that it's impossible to get up and shoot. In those instances I rely on a few people I know to supply images or I have gaps in my record.

Have you ever seen anything strange?  Yes but please define strange. There is a wide range to cover. I have been shooting sunrise on a beach with a couple doing things normally done behind closed doors a few feet away a couple of times. One of which happened on the esplanade in the middle of Cairns, the couple were interrupted by the arrival of the police. I have seen people hit by waves and been left skinny dipping even though that wasn't their intention. I have seen plenty of fisherman and a couple of Photographers caught by waves. For animals I have encountered Seals, Penguins and a Dolphin dive completely out of the water over the freshly risen sun. I have found beaches covered blue with Portuguese Man’o war, covered black with dead migrating Mutton birds. I have nearly been struck by lightning several times and anyone who knows me would not believe that I have had a hide, and I do mean hide, from a storm in a public toilet made from corrugated iron as it was still the safest place to be. So many rainbows they are beyond count although the best always come to mind, Waterspouts, Moonbows and several Bolide meteors. For atmospheric phenomena we have Crepuscular Rays, reverse Crepuscular Rays, Purple skies, Red Rain and on one occasion and amazing Brocken Spectre.

The Dark? No, I’m into Astronomy and spend hours and days on my own in some weird and wonderful dark locations. While I’m not bothered by the dark I do find it a bit lonely and so I find I listen to music when I shoot. A good pair of headphones can work wonders, just don’t start to sing along.

Being alone? No not really I’m usually quite comfortable with myself and being a larger guy I feel that I would be safe from and "interesting" people I may run into. I find this one goes hand in hand with the Dark question.

Slipping on rocks and hurting myself? This used to be an issue and early in my days I wore sandshoes or gumboots while shooting. Both of which are not known for their grip on the rocks. My second broken coccyx occurred while I was shooting a Sunrise Panoramic at a slippery boat ramp. I discovered the rock boots from BCF about 4 years back and I have only worn them ever since. I now feel safe while walking over any rock platform on the coast..

Accidents?  Mainly see above but there are other accidents that can occur. Dropping the camera onto rocks or into water (done that), have a Car accident (done that) require an unexpected and Urgent loo break (done that). Things happen, that’s life. To stop doing something you enjoy because something bad may happen will prevent you from doing anything. While I won’t say ignore the danger I will say to treat it with respect but don’t let it stop you. And as a side suggestion always carry toilet paper either in the car or the bag.

Animals? Well they are some of the unpredictable things we run into as photographers. A wet Dog could jump on you while you’re next to your tripod and knock the camera over. You could be shooting in some rock pools only to find when you look down a small octopus with electric blue marking has wrapped itself around the front of your boot. You could be in a field waiting for Sunrise shooting the night sky in the dark when a dog that you didn’t know was there, licks your hand and you scream like a little girl. You can find a huntsman spider deciding to set up a home in your camera bag while you have been shooting. All these things and more have happened to me at some point during the last 5 years.

And one I never tire of hearing. Whats the BEST Sunrise you have seen?  There have been many spectacular Surises and quite a few are burnt into my memory, the Red Avoca rain morning, the Fire sky over Pearl Beach, The sunrise storms at Putty, Patonga and Norah Head do come to mind but the number one all time sunrise I have seen so far was 22nd June 2014. The sky was a blaze and the clouds arranged themselves in such a way that part of the sky appeared cool blue and part warm gold. I could see that the progression of the clouds would create half a sky of blue and the other of gold. I found a line in the rock platform at the Skillion that pointed to this part in the sky and waited. I didnt have to wait long but the Image speaks for itself. Its the image at the top of this Blog Post. every time I look at this image I am reminded of that amazing sight and I know that had I not decided to shoot Sunrise every day I would have probably missed that opportunity.

Shooting Sunrise is very rewarding and I can easily say that after 5 years the novelty hasn’t worn away. I still enjoy getting up and shooting every day. I do like company, that’s why I started Social Sunrise. Watching the sky brighten on a new day doesn’t get repetitious at least not for me.

So why do I do it? Enjoyment, relaxation, beauty, wonder all these words fit and none of them do at the same time. Why not ask me in another 5 years. 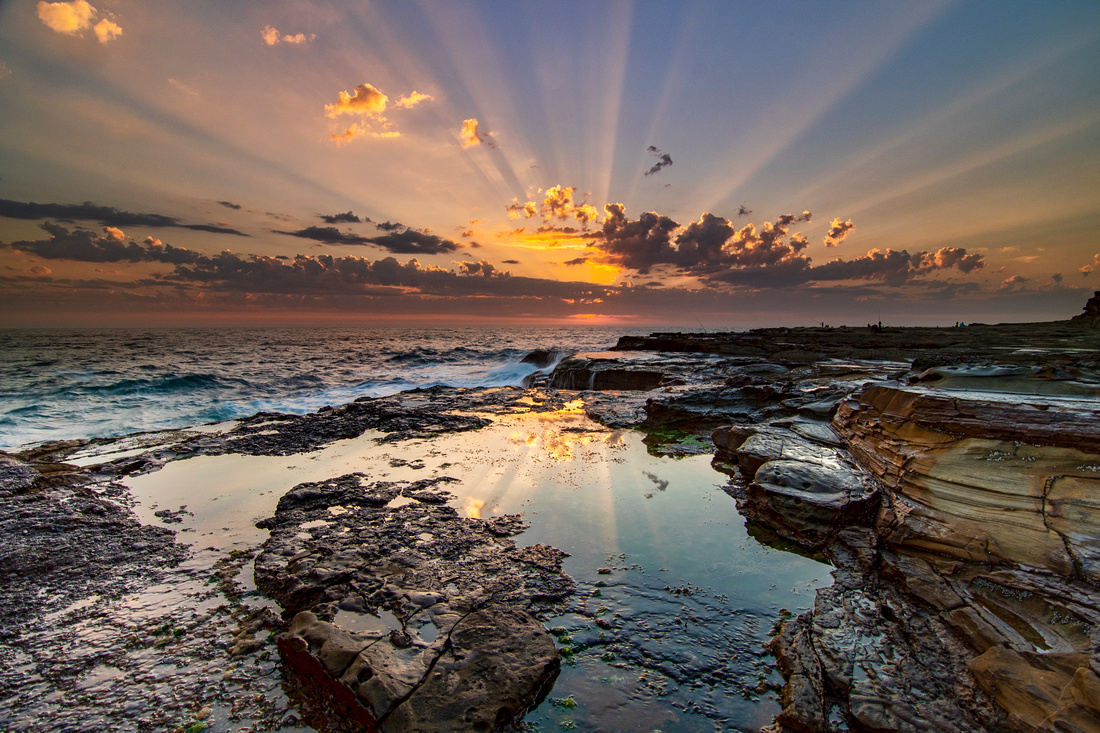